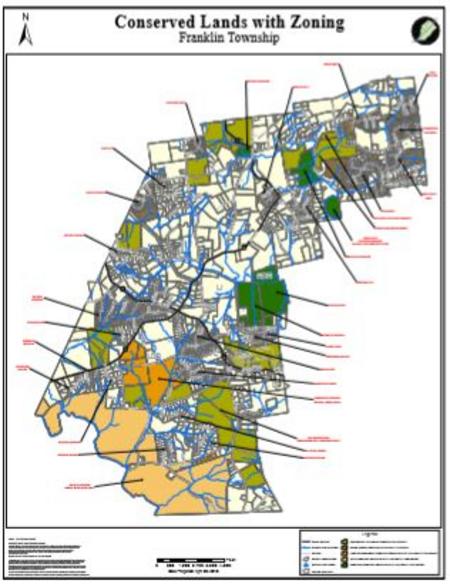 In 2002, the Township initiated an Open Space program by establishing a 0.50 mil real estate tax by referendum with the funds dedicated to land acquisition for the primary purpose of limiting the amount of available land for residential development.
The program commenced with studies and began land acquisition in 2006 which continued through 2011.
Twenty-seven percent of the total Township land (2,231 acres) was preserved for a program cost of $9.7M to 2017. Chester County and PA provided $1.7M and $1.8M respectively. The total cost to the Township will be $6.5M which includes the total loan interest to payoff in 2040. For a cost perspective, the Township’s total annual budget is approx. $2.8M.
A major component of the Open Space funding came from a $3.5M loan. The payoff date for this loan is July 2040.
By 2011, all funds in the Open Space Fund were exhausted and the program stopped in 2012.
The Open Space fund is currently overspent. The annual cost of the loan service is $167K/year which exceeds the dedicated tax receipts. An annual deficiency of $21K is made up from the General Fund and this will need to continue until the loan is paid off. From 2010 to date, the grand total deficiency is $170K.
Since 2013, an additional 591 acres have been preserved. Only the Stoltzfus property (100 acres) required financial support from Franklin Township. All others were financed by private owners and other governmental agencies.
Below is the current status of Franklin Township land preservation as of Oct 2019:

As a matter of policy, the Township is not opposed to future land preservation opportunities provided the following: 1) the land is high value farmland, 2) the arrangement is an Agricultural Easement not Township ownership, 3) Chester County participates, and 4) payments can be made over a 5-year period with no interest. This type of land preservation displaces new housing with the highest efficiency compared to other techniques used in the Open Space program.  Such an arrangement was agreed to in 2016 when the Board worked with Chester County to preserve 55 acres with no cost to the Township.
Over the years, the Township has managed its finances well using careful financial management and effective cost control techniques. As a result, a single farm land Agricultural Easement could be exercised by the Township if the terms and conditions were favorable.
The Township will not engage in an aggressive Open Space program similar to the previous 2006 -2011 acquisitions.  That would require a major policy change, a large tax increase, and a long-term loan leveraged by new tax income.
Housing growth in Franklin reduced significantly after the collapse of the sub-prime mortgage market in 2007. Refer to the tabulation below for trend. The strong development pressure prior to 2007 left a number of abandoned projects in various stages of completion. Several of these projects had significant value, were purchased by developers, and completed with a reduced scope. Wyndemere is a notable example. Nearly all these abandoned projects have been completed.

(Back to Township Information page) 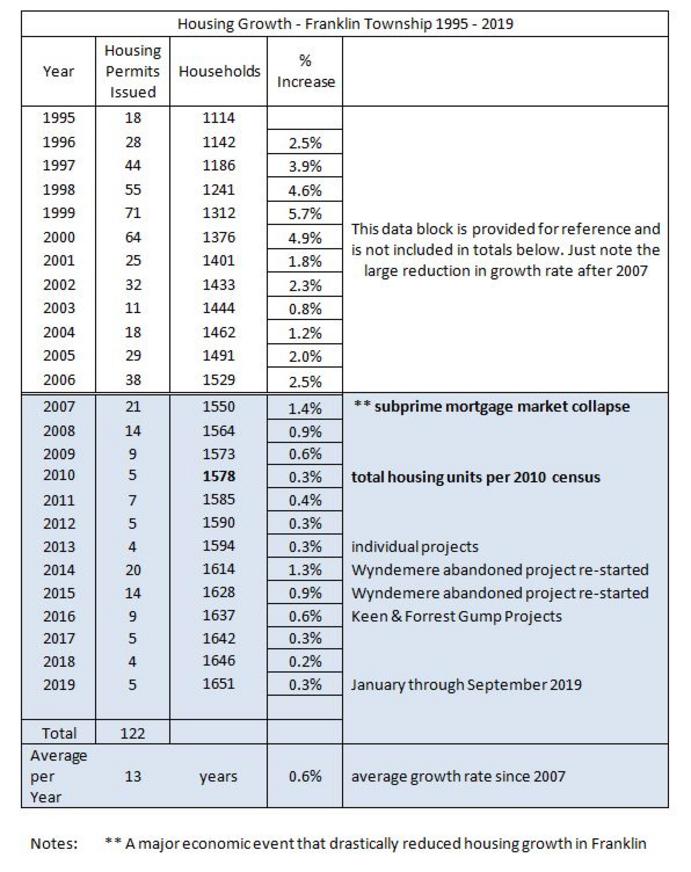